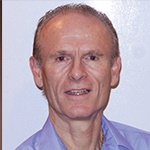 Terry Fralich, LCPC, is a co-founder of the Mindfulness Retreat Center of Maine and former Adjunct Faculty Member of the University of Southern Maine Graduate School. He has led more than 400 seminars, trainings and retreats at the Center, at Omega Institute, Kripalu Center for Yoga and Health, both nationally and internationally. His expertise consists of mindfulness, neuroscience, CBT, brain change, emotional intelligence, stress reduction, meditation and the treatment of anxiety and depression. He has been teaching transformative mindfulness skills and practices for 20 years and has pursued his own practice of mindfulness and meditation for 40 years.

Terry studied extensively with His Holiness the Dalai Lama for 25 years and with some of the American pioneers of mindfulness, including Jon Kabat-Zinn and John Welwood. His first book, Cultivating Lasting Happiness: A 7-Step Guide to Mindfulness, was cited as one of “the 12 essential books on mindfulness.” His second book, The Five Core Skills of Mindfulness: A Direct Path to More Confidence, Joy and Love, presents his clear and unique approach to mindfulness practice as a powerful force for healthy change in our everyday lives. Prior to becoming a mindfulness therapist, academic and author, Terry was an attorney who practiced law in New York City, Los Angeles and Portland, Maine.

Financial: Terry Fralich is in private practice. He receives a speaking honorarium from PESI, Inc.

Non-financial: Terry Fralich has no relevant non-financial relationship to disclose.