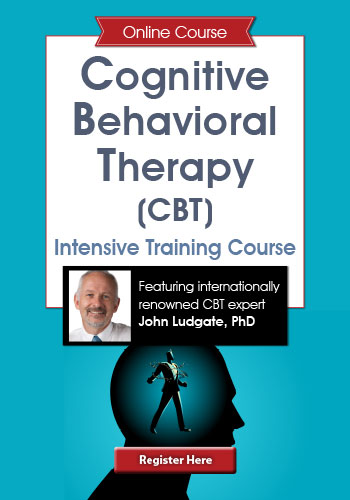 Do you have a client who everyone else has given up on?

They've seen multiple therapists, without the relief they want and deserve...

Maybe you feel stuck with this client — and at this point, even the client believes they are not capable of getting better.

But it doesn’t have to be that way…

You can offer them hope...with powerful and practical interventions that are proven to WORK.

Evidence reveals Cognitive Behavioral Therapy (CBT) is one of the most effective treatments for chronic, recurring, and challenging mental health conditions such as:

Now, you have an exclusive opportunity to learn this powerful modality in a comprehensive online course from CBT expert and author John Ludgate, PhD.

In this intensive online CBT training course, you'll master a fresh set of clinical tools and skills that can transform your practice, and treatment outcomes.

Plus, earn up to 19 CE Hours—included in the course tuition!
Click here for CE credit details
In this intensive course, you'll master the skills and competencies necessary to apply CBT with a wide variety of clinical populations.


This is NOT a "one-strategy-fits-all" approach.

Rather, this CBT course offers you a complete collection of practical ways to integrate this empirically supported approach into your very next session.

This online training has been created for helping professionals, including:

What You’ll Discover in This Online Course
Dr. John Ludgate will guide you step-by-step through the following in-depth modules:

Get started with the fundamental concepts of CBT. You’ll join John as he examines and reveals the power of Aaron Beck’s original CBT model.

He’ll then walk you through effective strategies for socializing your clients to the cognitive model and three levels of cognition.

In module 3, you’ll move into the application of CBT to specific problems and symptom sets you see in the clinical setting. You'll focus on bipolar and depressive related disorders as well as sleep issues.
CBT for Mood Disorders

Module 5 moves into the application of CBT for treatment of PTSD, substance abuse, and non-borderline cluster B personality.

You’ll learn about making a personality disorder diagnosis, and examine the unique characteristics and corresponding assessment strategies. Additional information on DBT and schema focused therapy will be covered.

Plus, earn up to 19 CE Hours—included in the course tuition!
Click here for CE credit details 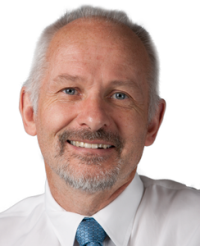 John Ludgate, PhD, is a licensed clinical psychologist who has worked as a psychotherapist for almost 30 years. He is a Founding Fellow of the Academy of Cognitive Therapy. His practice, which involves work in both a private practice and in an outpatient psychiatric center, consists largely of treating clients referred with mood problems and/or anxiety conditions. He is currently working at the Cognitive-Behavioral Therapy Center of Western North Carolina in Asheville, North Carolina.

In the early 1990s, Dr. Ludgate was a Research Clinical Psychologist at the University of Oxford in England and served as cognitive therapist in several outcome studies of panic disorder, agoraphobia, social phobia and hypochondriasis.

He authored Cognitive Behavioral Therapy and Relapse Prevention for Depression and Anxiety (Professional Resources Press, 2009) and was co-editor with Wright, Thase and Beck of Cognitive Therapy with Inpatients: Developing a Cognitive Milieu (Guilford Press, 1993). His other books include Overcoming Compassion Fatigue (PESI, 2014) co-authored with Martha Teater and The CBT Couples Toolbox (PESI, 2018). He has written numerous journal articles and book chapters in the field of Cognitive Behavior Therapy for Anxiety and Depression. He has presented many seminars and workshops on cognitive behavioral approaches, both nationally and internationally.

Non-financial: John Ludgate has no relevant non-financial relationship to disclose.

Dr. Ludgate's CBT Intensive Course has received dozens of 5-star reviews.
See what others are saying!

"This was the best training I have had in ages. The presenter is absolutely the most articulate person. He explained things in such a way that I retained them and carried the strategies into my everyday work immediately. He has really helped me feel confident in practice. Great trainer and great content!!!!."

"I thought this was a great course and I enjoyed it very much. Dr. Ludgate showed a very humane attitude regarding clients with differing diagnoses and gave very good examples of how to deal with various clinical situations."

"I loved the course and especially the presenter, John Ludgate, who was extremely knowledgeable, experienced, imparted a vast amount of information and was FUN to listen to. The time whizzed by while online with the course. I highly recommend him and the course."

"Great course, learned a lot of techniques to use and how to better serve my clients. Thank you!"

"GREAT presenter who made long presentation interesting through his knowledge, experience & sense of humor! Very enjoyable as well as informative!!"

"An excellent course! Dr. Ludgate is a wealth of information and he delivers it in a manner that maximizes learning."

"Dr. Ludgate did a great job of presenting information in an engaging manner. I would definitely take another course with him!"

"It is the first time I watch an online seminar like this and I have to say I am excited. I gained so much information in such little time, and although it is not my native language I had no problem understanding the lecture. Thank you for the pleasant and worthy experience."

"An excellent program with a very well prepared presenter. One of the best courses I have attended."

"Dr. Ludgate is by far the best presenter I have ever received education from. His material was perfect, he is well educated on this topic, provided great examples, and was more than prepared for all scenarios."

"Excellent humorous and articulate speaker with much knowledge of his specialty. Was pleasant and interesting and able to keep my interest and attention throughout presentation. I divided them into segments over time."

"Awesome course; will use PESI in the future."

"Great course. Thank you! Presenter was knowledgeable and very clear."

"I am amazed at how engaged I was without physically being present. Usually, I am easily distracted with online forums. However, he was easy to follow and provided several detailed explanations."

"Great course and I very much appreciated having the flexibility to do it on my own time."

"Dr. Ludgate is extremely knowledgeable and experienced on the topic. I enjoyed his delivery method and found the supporting documents/handouts very helpful."

"The coverage of CBT application was comprehensive, thorough, and well-illustrated. It has immediate and broad applicability. The presentation style was effective and interesting, and I enjoyed the training thoroughly!"

"One of the best trainings I have ever taken. Very informative and great speaker. Hoping to take more from him."

The Next Steps in Advancing Your Practice
Watch your email for your order confirmation. You’ll receive instructions for instantly accessing the comprehensive videos, handouts and bonus materials—all designed to help your clients regulate their nervous systems so they can feel safe in their body. Click here for course objectives and outline.
Review the course materials at your own pace, in your own home or office, and at your convenience! All materials are downloadable/printable, and you’ll have unlimited access to all course videos and materials online—forever. You can also use the PESI Mobile™ App to access the content on your mobile devices, wherever and whenever you want.
Collaborate with other professionals on the course materials through interactive message boards. When you register for this course, you’ll join a community of hundreds of practitioners using these tools in their own practices. Use this valuable connection to share insight and experiences, and to build your professional network.
Complete your online CE tests and earn up to 19 CE hours! Click here for CE credit details and credit details specific to your profession.
100% Satisfaction Guarantee
Register for this intensive training course without risk. If you're not completely satisfied, give us a call at 800-844-8260. We're that confident you'll find this learning experience to be all that's promised and more than you expected.

Plus, earn up to 19 CE Hours—included in the course tuition!
Click here for CE credit details
NOTE: No additional discounts or coupons may be applied to this course.
CRS001223 - © Psychotherapy Networker and PESI Inc. - All rights reserved - Email: courses@pesi.com - Phone: 800-844-8260
Back to Top